“When I was in my teens I was fascinated by the variety of languages. It was my dream to travel the world and to learn them all, …” 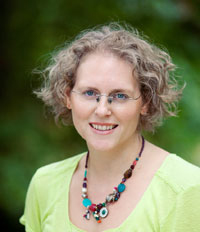 Learning English in school at the age of 11 and French at the age of 12, Barbara aspired to live in foreign countries to speak the languages like natives do. She worked in the South of England for two years in order to do exactly that in her late teens. After her return to Germany she studied English Commercial Correspondence in her spare time.

Barbara now lives with her husband and their two children in Royal Tunbridge Wells, Kent. Their children are being raised bilingual.

In 2013 Barbara started German Conversation sessions with primary school children whose parents relocated to England after spending some time in Germany/German speaking countries. Some of these children have now moved on to schools such as Eastbourne College and Tonbridge School, where they can continue to use their fantastic German pronunciation skills that they kept alive since their move to England.

Contact Barbara to find out more and to arrange a free trial session.